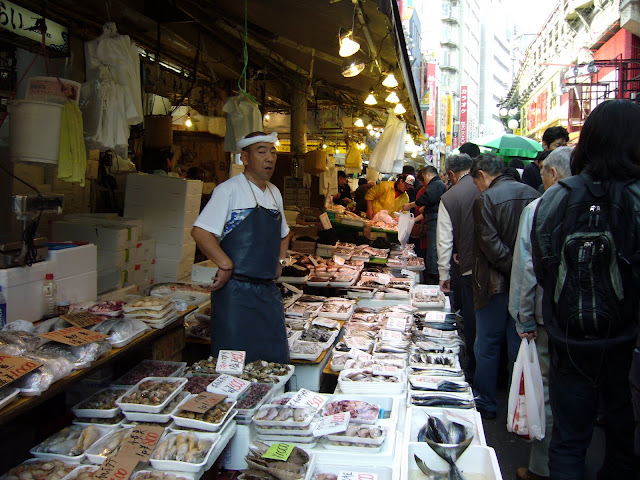 Japan and Service are two words that seem to belong together. Every visitor to Japan will learn quickly that a customer is not a king (as he is supposedly in the Western World), or an emperor - no a customer is a god. Well, I wouldn't go to that extent but Shopping really is an adventure of its own in Japan.
Yes, everything has its price. But good, heartfelt service will be bestowed upon you even if you look way too poor to be able to afford anything in that store. (Example: Student (=me) with rather out of date clothes in a Tiffany Store at Ginza Street. I would never walk into a Tiffany Store in Germany. Ever.)

Today, I just picked some random pictures out of my last year Japan trip picture folder. As a tourist you'll try to find some rather "traditional" places to have a look at Japanese trader spirit. Like the Ameyoko, a street in Ueno (picture above). Ameyoko is really crowded nowadays (it was a Saturday, though) - on weekdays you'll find more foreign tourists, I guess. If you are inclined to buy: Fish really is (was??) cheap there and you can have great sushi there, too. 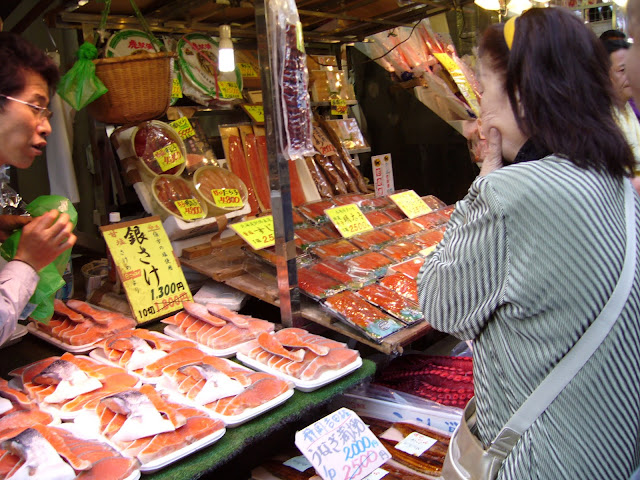 "Hm, which salmon steak am I going to buy today?" (It's really cheap. Wish I could buy salmon that cheap and fresh in Germany.) Sadly, I never bought fish there - wouldn't have been able to cook it anyways. But still - I like to go trough Ameyoko as there are also Japanese bakeries, which sell freshly made melon bread or other food vendors with okonomiyaki (japanese style pancakes with vegetables and sea food). Also, there are a lot of tea shops around for lovers of Japanese green tea, as me. 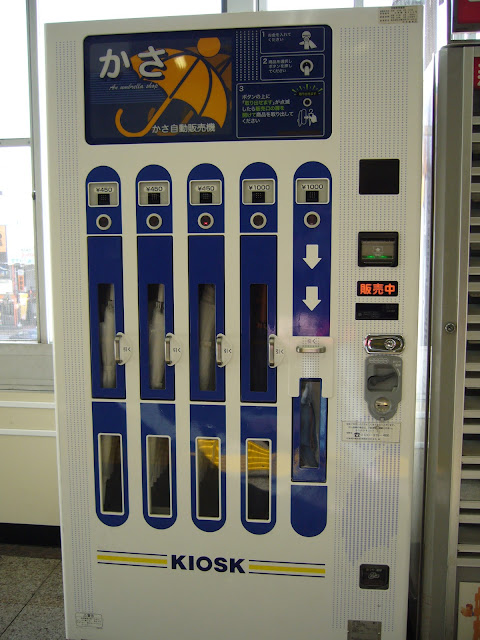 As I said: random pictures. Japan also is the country, where the most products are accessible most of the time. Like 24/7. Around the clock.  There are the konbini stores (= small convenience stores), which are open all night and day and then there are vending machines practically everywhere. Mostly for soda and canned coffee, but sometimes for other goodies as well. In this case: Umbrellas! I really had to take this picture at the train station in Omiya - I loved it so much.
By the way, I never saw a vending machine where you could buy used panties. Sorry, boys, I guess those machines exist somewhere in Japan, but not in the areas where a respectable girl like me actually went to. (Yes, I went to Kabukicho once. At night. With friends. But we just did karaoke.) 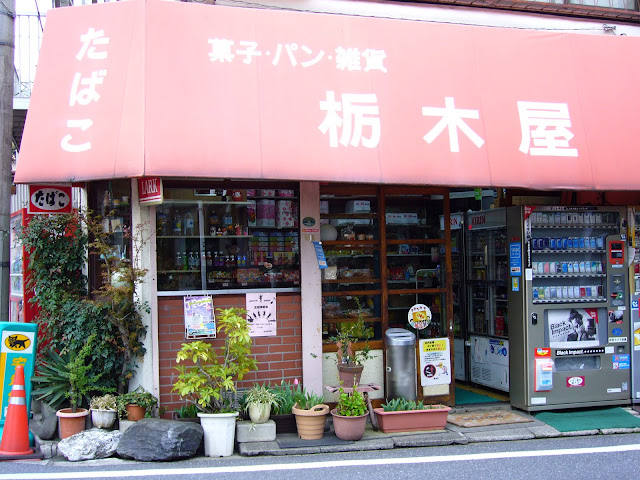 An old styled store in downtown Ikebukuro. It is always astonishing that even though Tokyo is the capital of department stores so huge you can easily get lost in them, it is also still a city where the smallest shops seem to exist. Sure, it is getting harder for little shop owners, but still - they are friendly and seem contempt with their situation. 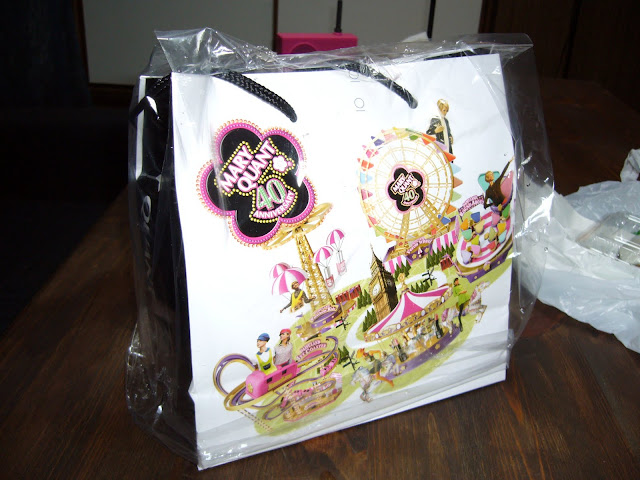 My favorite department stores are Loft and Marui city, by the way. The first for its marvelous selection of paper goodies, Japanese pens, washi tape and the like, the second for its obscene amount of clothing (every style one can imagine: cute, serious, grown up, festive, really anything) and accessorize. Well, it was torture to be sure - but Japanese clothing was out of question for my western butt, so I had to feast on necklaces, bags and make up. (You don't wanna know the details, to be sure.) This picture above just shows what happens, when you are doing your shopping trip on a rainy day: Your shopping bag will end up in plastic covering so it can't get wet. (I bought Mary Quant make up.) I still can't quite decide how I should find that. I mean, I totally freaked out, when I saw that happen for the first time. I was so stunned. (We Germans like to recycle as in "We wanna save the world" and plastic has a very bad connotation for me...And in Japan....well, let me tell you: Almost everything is made out of plastic, even cheese.) But still, I'm very fascinated by this concept of covering a shopping bag up. 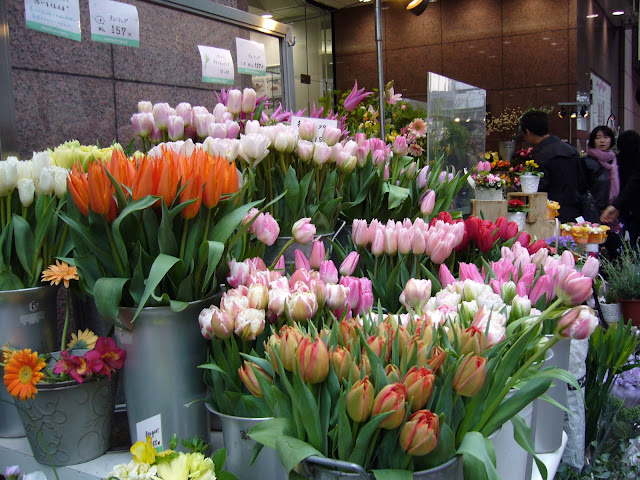 For some reason I made lots of pictures of flower shops in Tokyo. Maybe I was missing some greenery in this mega city. And I also love tulips. The light pink ones - or the filled ones! But I never bought plants in Tokyo as it is just way too expensive. 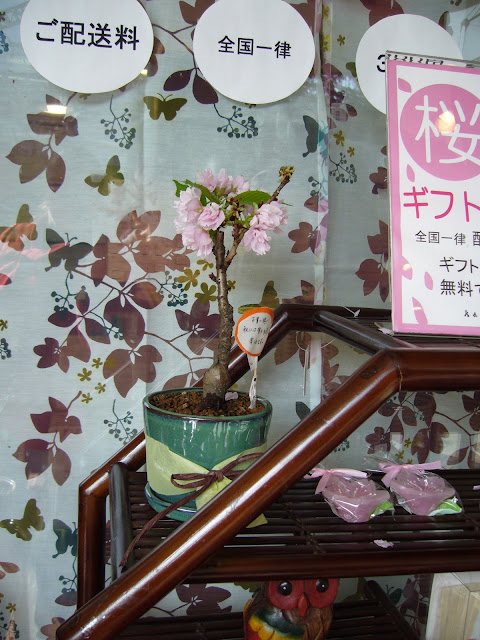 But I really was tempted to buy this Bonsai Cherry tree! But sadly, it wouldn't have survived the flight, let alone be allowed through customs in Germany. What a shame.
Posted by Chisa at 12:29 AM