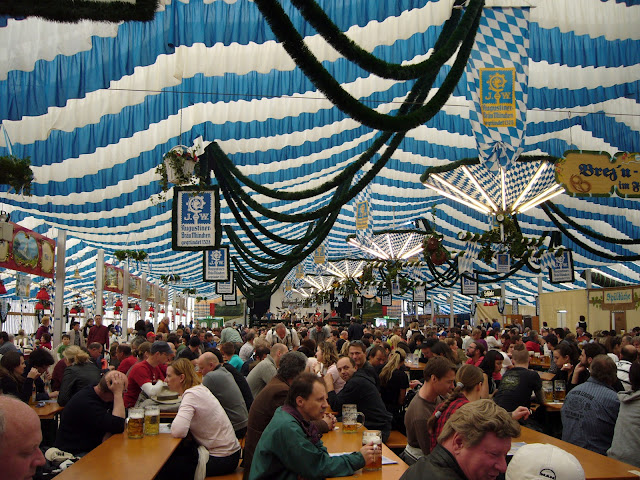 As a Thuringian in Bavaria I'm really astonished about the easy-going Bavarians. Celebrating sure is something one ought to do in a large crowd. Thuringians tend to stick together in smaller groups. But the Bavarians (or at least the people in Munich) tend to be really outgoing and happy to meet new people.
I had a Japanese visitor on Saturday and we went to the Residence, the German Museum and a notorious Biergarten. (Not depicted in the picture above. That was a notorious festival tent at the spring fair.) I'm not a beer drinker. Quite frankly, I belong to the Germans who just don't seem to be able to enjoy the most famous drink of Germany. But - alas - the beer there was really delicious. And after saying Prost! to some Bavarians next to our table, my Japanese visitor was happy, too.

I hope the weather stays good.
Posted by Chisa at 9:44 PM No comments: 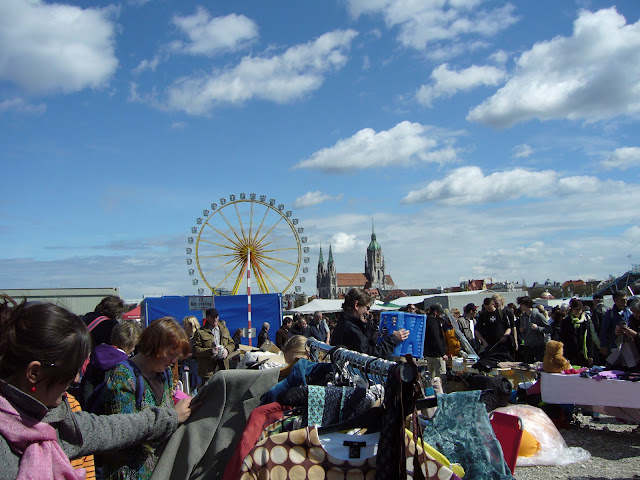 Spring took a break these past two weeks and when the sun finally came out again most of Munich was out and about the spring fair. A huge field (where in September the famous Oktoberfest is held) became a flee market with much to see and buy.
I bought an old postcard of Heidelberg. Old greetings from a dear place.

Please, spring stay as long as you like.
Everyone needs better weather.     ;)
Posted by Chisa at 10:24 PM No comments:

A Night to remember... 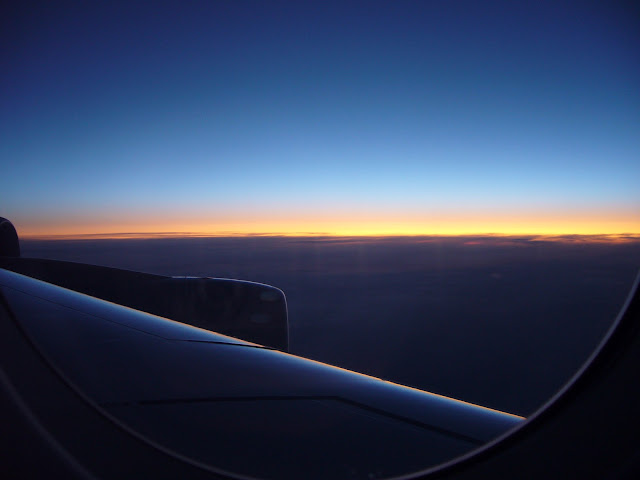 ...the lost souls of the Titanic, which sank exactly 100 years ago.

In 1997 a certain movie brought back the tragic story of this sinking. And I went three times to watch this movie in the movie theater. (It was the first movie I watched that many times in a cinema, which is remarkable as I was a teenager with very restricted pocket money (30 DM per month - makes 15 Euro per month in todays standards), and the next movie theater was 30 km away, so I needed someone to bring me and fetch me.) I read a lot about Titanic. I especially loved the story how Robert Ballard searched for years for the Titanic and finally found it. Possibly during the last chance he had.
The movie books and soundtrack CD - I got them for my birthday and confirmation that year.

I knew the movie story by heart. And still do, I guess. But somehow, sometime it was enough. The story grew too tiresome, the love story too much.

So... I never bought the DVD. I didn't watch it when TV stations started to bring it. I possibly didn't watch the movie for 12 years.

Last year, when the 100 years sinking remembrance began, I watched a rerun and could rethink my opinion.
So I have to say...
...the introduction with the actual footage from the wreck and the story about the old lady and her memories was a very good decision for the movie storyline. I still like that a lot.
...the facts are very well researched. Walter Lord, who wrote "A Night to remember" (a book first published during the 1950s), served as consultant and did a good job.
...the effects and sets are nicely done and are even nowadays up to date.
...the sinking and especially the "voice" of the dying ship are total goose bump material.
...Kate Winslet is fabulous!
...the love story is actually way too much and unbelievable. I don't like that anymore.

May the souls of the dead of Titanic rest in peace.
Posted by Chisa at 12:16 AM No comments: 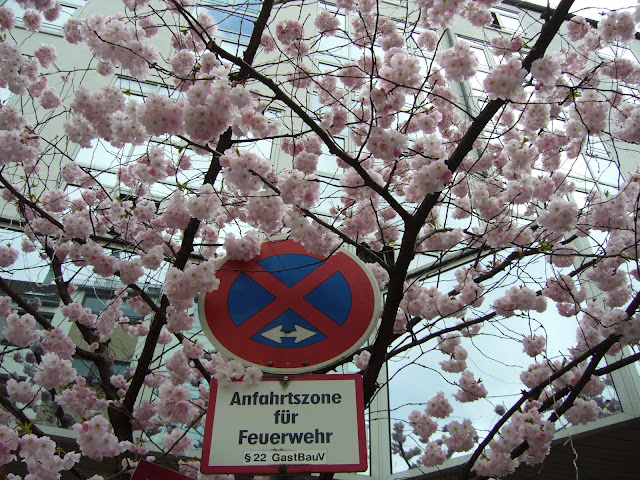 I guess there aren't any sakura blooming in my forest village yet. (Picture taken in Munich.)
Posted by Chisa at 7:00 AM 1 comment:

Email ThisBlogThis!Share to TwitterShare to FacebookShare to Pinterest
Labels: Sakura 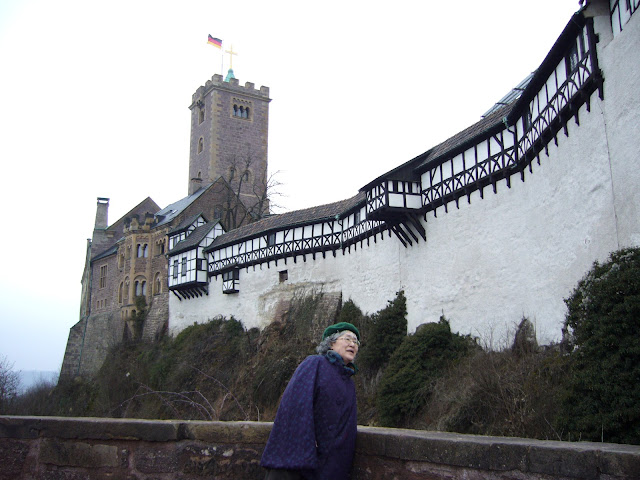 A picture from early March depicting one of my favorite castles out there (It's been around for more than 1000 years. Well, not in this form. Different parts from different centuries.) And a Japanese friend, who visited me. 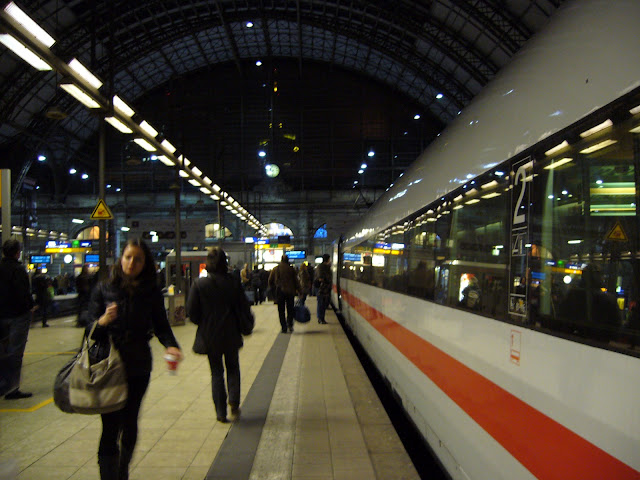 (Actually, I'm not transiting via Frankfurt main station anymore. Which is kind of sad as this is my favorite train station in Germany. I don't even know why. Maybe because its old feeling has been preserved and restored and not just modernized as many stations in Germany have been.)
But I'll go by ICE for sure.
Posted by Chisa at 7:00 AM No comments: 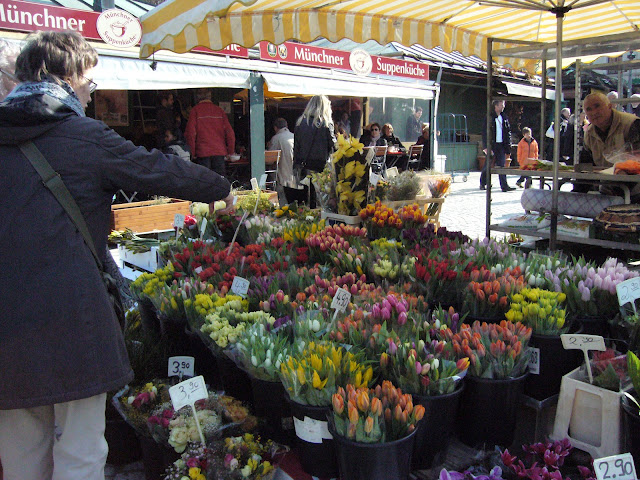 Did I mention that I love tulips? Yes - it's tulip season again!
Posted by Chisa at 7:00 AM No comments:

Getting used to my new life 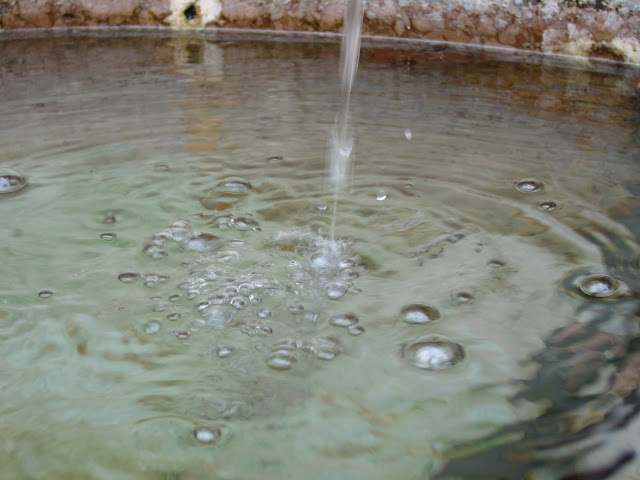 Time has sped up and as my work life takes place in front of a PC, I tend to ignore my own after work.
Good news first: I'm getting used to my work.
Bad news last: I managed to make a small error with really big effects just yesterday. As it might affect clients I'm really upset about this. Fortunately my boss supports me and doesn't seem to mind too much.  (He brought cake for everyone today.)

Still, I'm lonely and my telephone bill is rising and rising...

I'll try to post more. Hope you are well and healthy and enjoying early spring.
Greetings.
Posted by Chisa at 8:23 PM No comments: