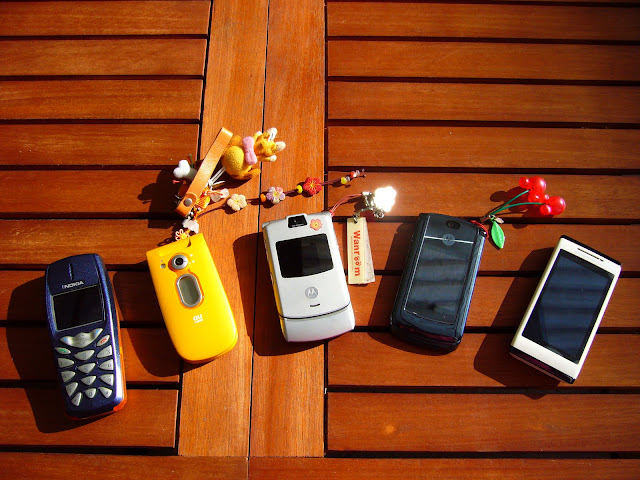 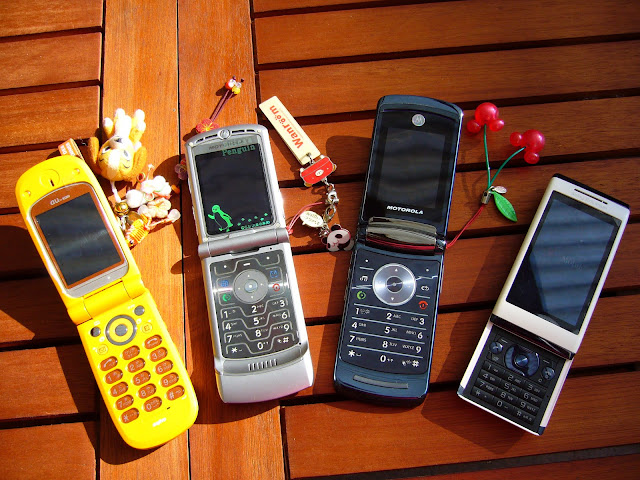 When I was back at home last weekend I thought about some of my collections which I could show you, dear readers. Well, I have sparkling things like beads in a drawer, I own lots of random Japanese kitsch, there are many color pencils I collected throughout my childhood years up to now (It is very hard for me to ignore new color pencil collections...) and in my earlier twenties, when I actually earned some money, I started to collect MAC as in Make up Arts Cosmetics (and I love to use it!).

Well, I ended up shooting my collected mobile phone history. Actually my first Nokia phone is missing. Maybe I (or more precisely my parents) recycled it as one should do with old technology?

Well, the left one was a Nokia and it's made of very cheap plastic indeed. I can't believe that we actually used such greenish screens in the early 2000s. By the way, I was one of the last students in my school to get a mobile. I begged my parents, but they were never very much into newest technologies. And well, they were right: Why would a school student actually need a mobile? Other than downloading new jingles and have to pay a lot for it? But then, the bus sometimes didn't come and I had to reach my mother to pick me up from school. (I used a phone card and an old fashioned phone booth.)

When I went to Japan in Spring 2005 for one year I got the orange KDDI mobile. I loved it! I had never seen such an up to date and sophisticated and by the way stylish phone before! And I could take pictures with it!! HA! Mobiles on the German market just started with that kind of technology. And even nowadays, if you have a look at the Japanese mobile market you'll realize how far behind we are.

After my year in Japan I was rather disappointed to get a new mobile. It was really hard to get a folding mobile in Germany. So I got a motorola Razr and afterwards the Razr V2, which I still love very much. I actually miss that one quite a bit. My one year old Sony is again made of rather cheap plastic. But I can take good pictures with it while on the move. And as long as I can make phone calls with it, it serves its purpose, I guess?

Obviously I'm dreaming of an iPhone and actually was offered one the day I bought the Sony. But in Germany monthly costs for an iPhone are way too high for a student to pay. (I would have had to pay twice as much as I pay now!) So I declined (I'm so proud for being that strong! hahaha).

Hopefully I'll get a full time job sometime this year and then I'll get one!
Posted by Chisa at 1:46 PM