Indeed, earthquakes, fires and Pacific War bombings haven't spared much of Edo (the old name for Tokyo) for the tourist to see. And even without natural and man made catastrophes, original houses are made of wood and the humid summers in Japan tend to dissolve wood very fast. That's another reason the main sanctuary of the famous shrine of Ise is rebuild every 20 years. Private houses aren't getting very old either if the financial situation allows it. The house in the picture above isn't very old, even though it looks like it. It was situated in Ikebukuro Honmachi, the part of Tokyo where I lived last year in March.
It was a harsh lesson for me, when I first came to Japan. I expected way more old buildings and shrines and temples than I actually could see with a first glance. And I guess that's a disappointment for many western travelers. But we Europeans are rather spoiled with old downtown sceneries (even though it is sad to think of the wars that have left so many European cities in rubble). And the second glance is worthwhile in Japan! Wandering about you can see so many little treasures and the new architecture doesn't even need to be seen as nuisance either. Rather, newest Japanese architecture tries to combine the best of old and new! (Please, don't kill me Prof. X!! I'm not using "tradition" and "modernity" as keywords...)  Let's have a look. 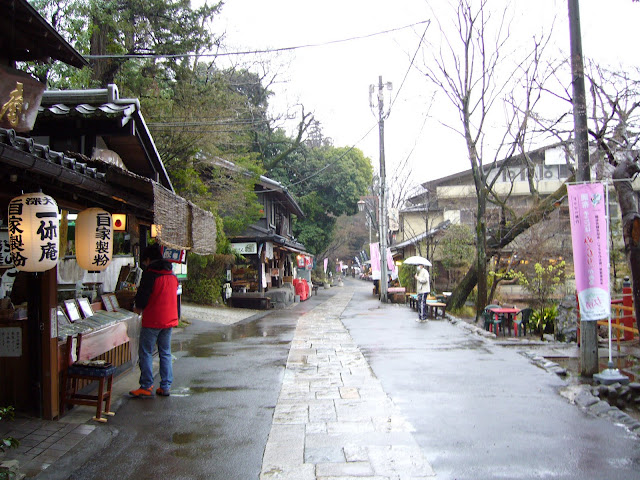 Mitaka is a lovely outskirt area of Tokyo, where the soul of Edo lingers on. Some of you might know that it is the place of Studio Ghibli - at least the museum can be visited here. (Studio Ghibli: Maybe the most famous animation studio of Japan, comparable to Disney. Famous characters: Totoro, Nausicaä, Kiki, Mononoke, Howl, Ponyo) The day I visited last year was rather cold and rainy and nothing much was going on. But I loved the atmosphere the little village amidst a megacity breathed. There is some traditional trade along the road and one can eat soba (buckwheat noodles), manjû and other tasty stuff. 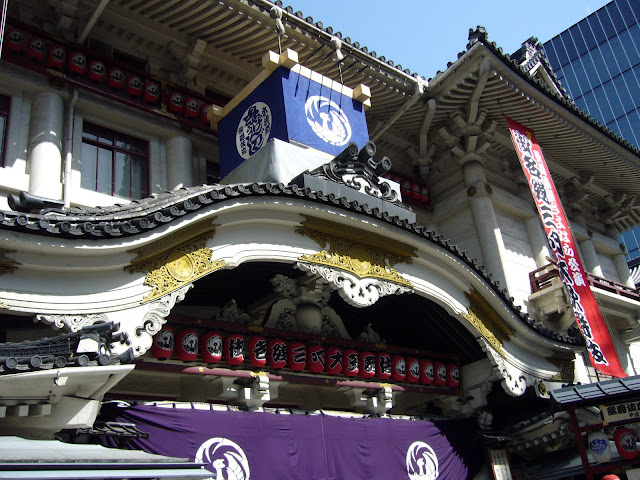 This is a picture of the infamous Kabuki za theatre (well, a part of it anyway) at the infamous Ginza street. Sadly, it was demolished shortly after my visit last year. There had been some concerns about earthquake safety, which cannot be taken lightly in Japan, as the "Big Northern Catastrophe" (the 'official' name for the Earthquake/Tsunami/Nuclear Catastrophe so far in Japanese Media) has shown. The last rebuilding had been in 1950, after the War. This building style was called "baroque Japanese revivalist style" as one can guess from the details, but used western building technics to keep it "fire safe". (the original building in that style was finished around 1924.) 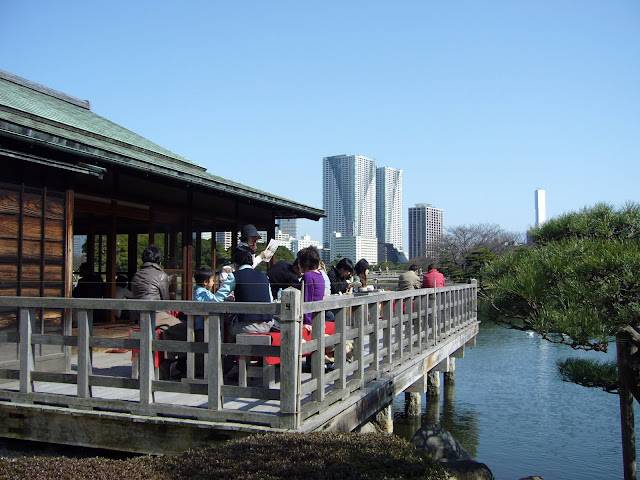 Another great and breathtaking example for new and old architecture in Tokyo is the Hama Rikyu garden. I love it there especially in spring during plum and peach blossom time (March). In the center of the park lies this tea house where you are served Japanese green tea in old style. There is no furniture in the tea room itself, and one has to kneel/sit on mats while being served matcha tea in a big bowl with a Japanese candy. The Hama Rikyu Garden ponds are connected to the Sumida River and have a tide. It remains the last Edo-style garden in Tokyo and I strongly recommend it for travelers in Tokyo. 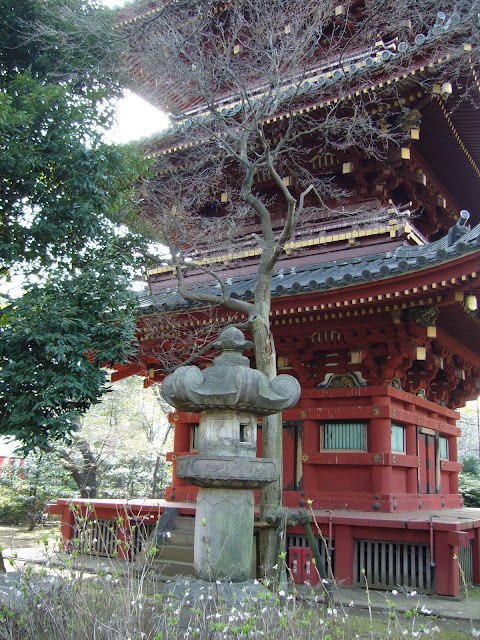 This pagoda can be found in the Ueno Zoo, the only Zoo in the center of Tokyo. For Germans this zoological garden seems rather sad and way too small for all the animals imprisoned inside. Even though the zoo has tried to build better facilities for their animals as there isn't much room in the midst of Tokyo to begin with, this is an arduous task. Obviously a pagoda doesn't belong to a zoo. It belongs to a temple or shrine. And the best places to find such buildings in Tokyo are Ueno park and - not far off - Asakusa. Next to the zoo lies the Tôshôgu Shrine, where this pagoda belongs to. 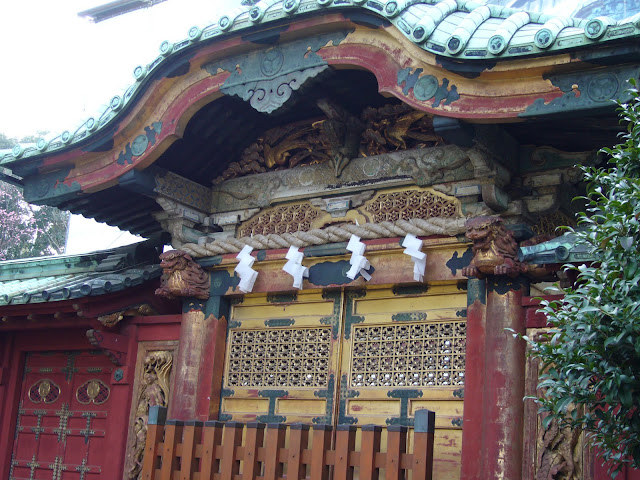 Normally this door stands open, but the Tôshôgu Shrine is undergoing renewal, that will last five to ten years (!) as I was told by a monk. (Every time I visit Japan I'm astonished by the doors the Japanese language can open.) So the main building is packed up in a big storehouse and can't be seen anymore. That wasn't a big problem for me as I've visited this Shrine a lot during my one year long stay, but I kind of felt sad for the tourists who were swarming about in Tokyo last year. When I lived in Japan 2005/2006 tourists from Europe or America were still scarce or at least not that common as opposed to last year, where "white people" (hakujin) were everywhere. Somehow that bugged me as I loved to be exotic when traveling in Japan. 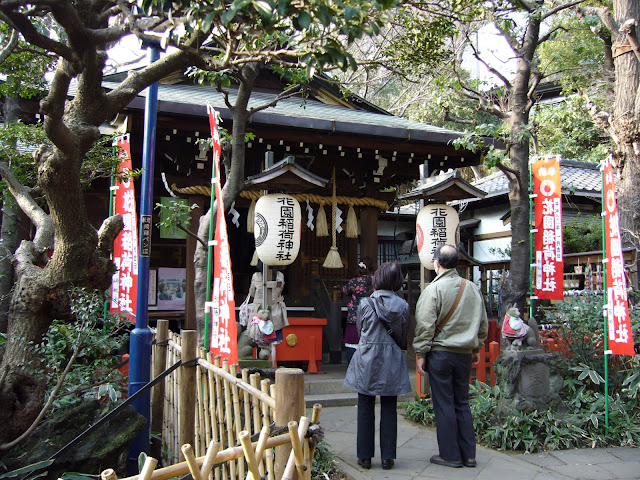 That's a little Inari-Shrine (Fox Shrine) in Ueno, which I totally adore. Can you see the fox statures? Since I came to Japan for the first time and lay my eyes on shrines like these, I'm convinced that my "animal spirit" is a fox. I don't really believe in such mumbo jumbo, but still...who knows? The Fox is a very interesting figure in Japanese folklore and religious beliefs. It combines good and bad traits and while the shrine honors the inari as being the one that promotes fertility (especially for rice! For humans there are less ...subtle ways to promote fertility), the foxes in folktales tend to be mean and insidious. Which somehow connects to the European belief of the fox as a cunning and shifty fellow.
I'll be back with "Glimpses of Old Tokyo" soon. Meanwhile let me emphasize my copyrights on this pictures. Please don't post them anywhere else without my permission and naming of the source. Thank you.
Posted by Chisa at 1:37 PM