Uh oh - I just realized that the year is coming to close. Very fast. Like in super fast and unstoppable. Where is Kronos - God of Time - if you need him? Maybe he could stop the fast spinning trough time and space just for a tiny second? Which wouldn't work. Obviously.

But Christmas time will be upon us in a short while. My American Family will celebrate Thanksgiving, soon. And in Germany we will think of the dead on the "Sunday of the Dead" (Totensonntag) before entering the festive mood. Or at least that is what my family still does. The rest of Germany - especially supermarkets - seem to be fully prepared for Christmas season already. Chocolate Santas and advent calendars are on full display everywhere. Since late August. It's just getting more crazy every year.

So, the time has come to do some Christmas DIY as I don't have money. And my statistics tell me, that you guys love my DIY origami coaster post. So, I'll prepare something like that in the very near future!

Other than that, here are some pictures of November so far: 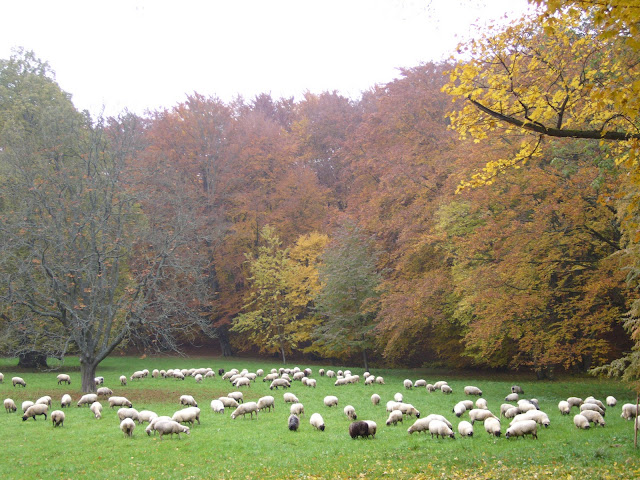 Last October weekend: It already looks very November-like in the middle of the colorful Thuringian forest. And I found a whole bunch of wool (still in it's natural form, though) for new knitting projects. See - there is even a black sheep! (This is in an English style park in Bad Liebenstein. So they use sheep to maintain its form. Otherwise the forest would claim the space in no time.) 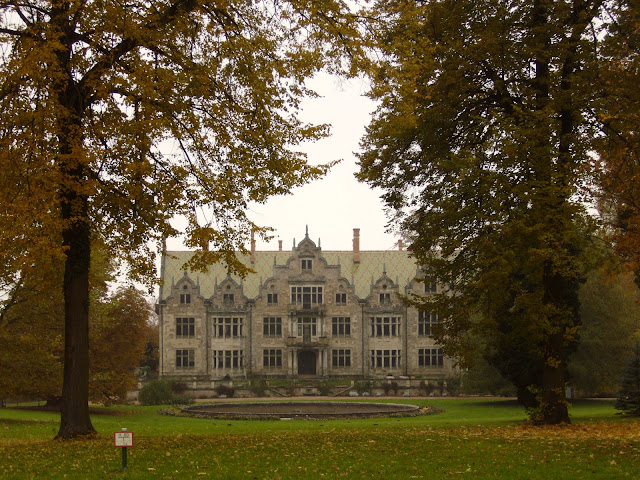 Yes, that's the little castle that goes with this hidden jewel of a landscape park. Doesn't it look quite English to you? It's called Altenstein and was originally built in 1736 and was meant as a summer residence to the Herzog of Meiningen in South Thuringia. It was rebuilt between 1888 and 1889 to look like an old-renaissance style English country residence. For more information click here. 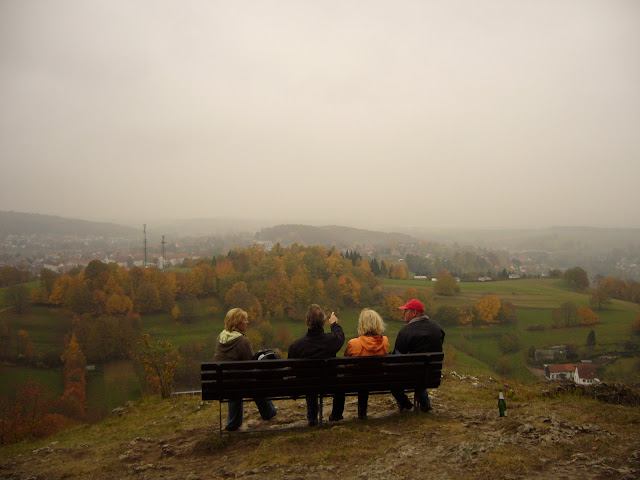 Some wanderers enjoy the view from Altenstein (and are drinking sparkling wine). Even though the day was quite foggy (which is our usual November weather in Thuringia), you can anticipate the great view one normally has from this point. The Thuringian forest and its little forest villages never cease to astonish me. I hope to visit the place where glitter balls (aka Weihnachtsbaumkugeln) have been invented during my next trip to my home area. It's a little sleepy town right in the middle of this vast Thuringian forest. 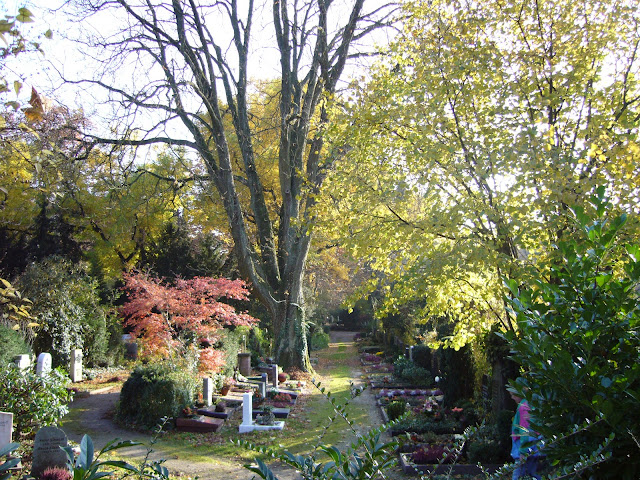 Back in Heidelberg I visited the graveyard. Behold! Halloween was already over, though. (It was my first time that I gave out candy to scary children at the door! Well, only two children, who deserved it, and two teenager who were rather pathetic for going out the get free candy. And that was it! Halloween is just a recent development here in Germany and I'm just a little bit jealous for having missed all the fun as I'm way too old for this ... festival.) No, the Bergfriedhof (Mountain graveyard) of Heidelberg is very famous in its own right as many famous people are buried here. 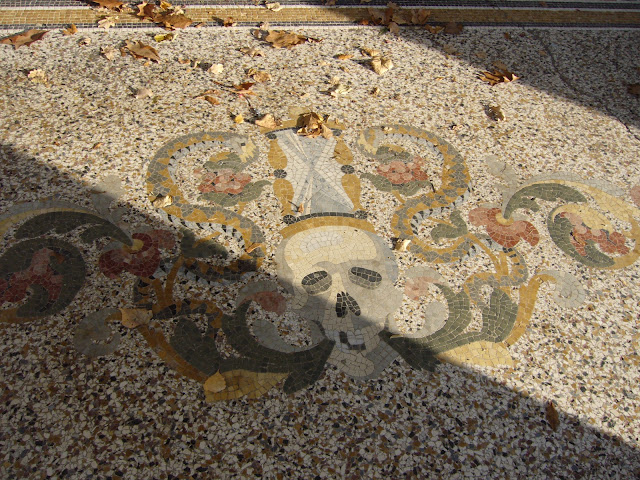 Memento Mori! Graveyards really aren't my favorite place of the world as I have quite too many loved ones there already. (Isn't that a contradiction? Well, I don't really believe that my loved ones are waiting for me at their graves. They are always with me, guarding me and maybe sometimes guiding me. That's what I want to believe anyway. Even though it would actually feel weird to not have a place to go to...) Time is ticking away and death is waiting. Unbelievable that one can make such a lovely mosaic out of that... 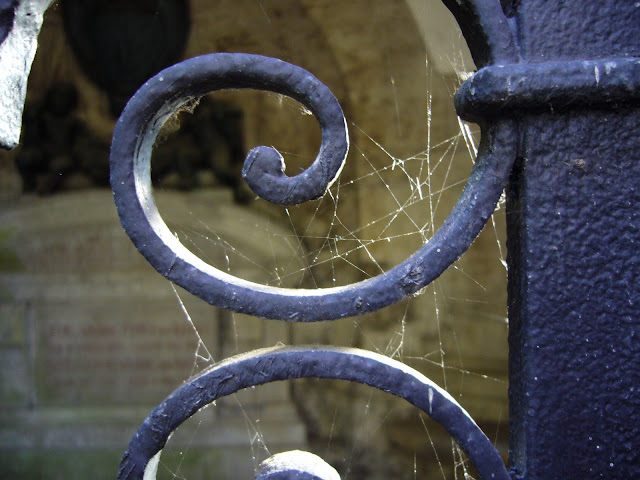 The graveyard is still in use. And the new graves are mixed in between the old ones. Sometimes only stone plates remain. Other times there are whole closed up family crypts. I even found one by some dukes of Thuringia, which I found odd and interesting. (Thuringia is 3 hours away by modern standards.) But I guess the dukes went to university here and maybe liked Heidelberg so much. Maybe. 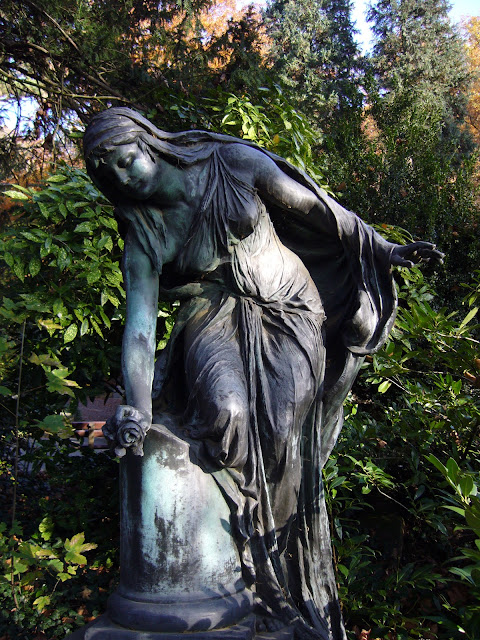 You can find all kind of statues and tombs here. I really liked hiking there. And let me tell you - the place was packed with people who went for their sunday stroll. And quite a few of them also sported impressive camera equipment to take some pics. So I didn't feel too odd about taking pictures myself. Even though the day was beautiful and sunny, I left the place with a rather gloom feeling. I only found one famous deceased: Robert Bunsen. For more information on the Bergfriedhof go here (German only - sorry).